Almost Vol Rose, once hated by Jacobs, at HVA 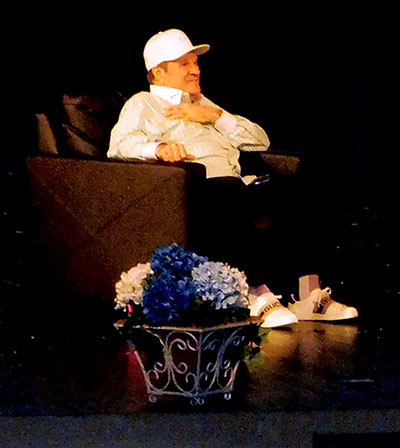 Pete Rose, the famed “Charlie Hustle” of the Big Red Machine Cincinnati Reds of the 1970s who finished his career with an MLB-best 4,256 hits (.303 lifetime average), was guest speaker during HVA Baseball Banquet in the school auditorium Saturday evening, May 22.

While he has ties to Knox County Mayor Glenn Jacobs through World Wrestling Entertainment, where Rose is a Hall of Famer, “I came to Tennessee in 1960 to see about a football scholarship,” the famed hitter said during his speech. “Thank God I didn’t take that or I wouldn’t be sitting here talking to you now.

“I also would’ve had to go to school. I hated school.

“I’ve been to Knoxville before,” added the 1973 National League MVP, who also owns the MLB record for games played, singles, at-bats and outs. “I played here when I was in the South Atlantic League (Minor League) and we beat Knoxville’s team to win the championship.”

Helping the Reds claim back-to-back World Series crowns in 1975 and 1976, then doing the same with the Philadelphia Phillies in 1980, Rose remains excluded from Baseball Hall of Fame consideration, and was banished from Major League and Minor League Baseball after gambling on the game while he was manager of the Reds.

“When you play sports, whether it be baseball, football, basketball or hockey, you have one objective — and that’s to win,” said the 1963 National League Rookie of the Year, who recently celebrated his 80th birthday. “You play baseball to win.

“There’s not a person in this auditorium, if they have kids or grandkids, that if they win, the ride home puts them in a better mood,” Rose added. “If you lose, it puts you in a bad mood. And it should. If you’re not in any kind of mood after a game, you shouldn’t be playing or you shouldn’t go.”

Rose, who has appeared in WWE shows, was introduced by Jacobs, who wrestled under the name “Kane” and participated in shows with Rose.

“A lot of Kane’s character was based on Pete Rose,” the mayor said in his introductory remarks. “He would’ve been a great bad guy.”

Jacobs, a lifelong St. Louis Cardinals fan, said he grew up hating Rose — but now, the two have a solid working relationship.

“When they first told me that I was going to do a bit with Pete Rose, I said, ‘Man, you mean I get to throw him on his head,’” he said. “As a Cardinals fan, you grow up hating Pete Rose, but now that I’m not as passionate, my feeling for Pete is nothing but respect.”

It didn’t take long for Rose to own the audience in the HVA auditorium Saturday night as he recounted his days in baseball playing alongside Hall of Famers Tony Perez, George Foster, Johnny Bench, Steve Carlton, Tom Seaver, Mike Schmidt and others.