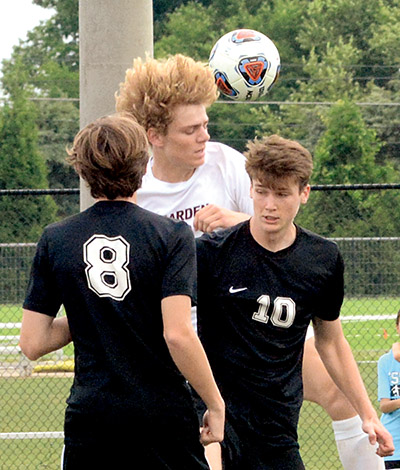 On top of Cole Hutchison’s nice crossing pass to an open Cameron Cook in front of the net for the game’s first goal, in the seventh minute, BHS had a second goal wiped out roughly two minutes later due to offsides.

And the Maroon and Gray offensive pressure kept coming in waves — until the Memphis-area Mustangs earned a corner kick in the 29th minute, and the first of two goals came late in the first half thanks to winning two scrums deep in the box and finishing things off in the back of the net. Houston (15-2-4) carried a 2-1 lead into halftime and made it hold up.

A few serious scoring chances from the SoccerDawgs in the second half, namely an open look from 20 yards out that sailed barely high in the 48th minute, didn’t find the back of the net, and Bearden (20-4-1) settled for second-place in a 2-1 final.

“I thought we started about as good as we could have; I thought we had them on the back foot,” Bearden head coach Ryan Radcliffe said, as the SoccerDawgs outshot Houston 16-6. “… I thought the game was there for us to take.”

However, “We made some self-errors, I felt like,” he added.

Personnel-wise, the SoccerDawgs lost “an important piece of our cohesiveness. Dylan (Kolnick) got a concussion and couldn’t play anymore, so that kind of messed up our rhythm a little bit,” Radcliffe said about the junior midfielder.

“… I still thought we would be able to come back, but it just didn’t bounce our way. I guess that’s soccer.”

As for that first-half chance to make it 2-0, “I think we took one of our goals away on our own,” Radcliffe said about the critical offsides. “I think it was going in, and we were eager to touch it, and the guy who was eager to touch it was offsides.”

About Houston’s two goals, “I thought, honestly, a lot of that was our mistakes, and we knew they were dangerous on free kicks,” Radcliffe said.

Affecting things were “some tired, worn-out boys that had given it everything they had,” the BHS coach added. “There were some little mental errors that kind of affected us there.”