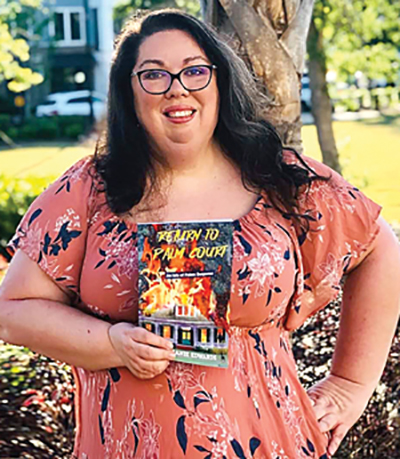 Stephanie Edwards never dreamed, when she adopted a shelter dog in 2018, it would trigger just the spark she needed to write her first novel.

The content writer and trained journalist — who freelanced for farragutpress six years ago — said she had long thought about writing a book, but was not really inspired until she and her husband, Ron, rented a beach house in Charleston, South Carolina, primarily to accommodate “Shadow,” their dog.

“We didn’t want to be troublesome neighbors, and we really weren’t sure about her personality at that point,” the Concord resident said. “But, beyond adopting our dog, renting that house was the best decision of my life.”

The couple already was drawn to the city’s romance. However, that particular trip — and house on the Isle of Palms — really spoke creatively to Edwards.

The house itself was “charming, but at the same time very scary looking,” she explained. “It really seemed like it would be a great setting for a horror movie or a book. I started to wonder, ‘Who lived here?’ ‘What happened to them?’ and ‘Did the house have its reasons to be scary?’”

Those ruminations led Edwards to write “Haunting on Palm Court,” which was published in September 2020.

While most of the story takes place in South Carolina, the book begins with its main character, Blake Nelson, living in Knoxville.

After catching her fiancé cheating, Blake runs away to her late grandmother’s beach house, where she tries to figure out her next steps.

Her fiancé follows her there, and after a violent confrontation dies, yet comes back to haunt her.

The romantic and suspenseful work of fiction quickly landed at No. 1 on Amazon’s New Releases in Southern Fiction list, and Edwards recently released a sequel “Return to Palm Court: An Isle of Palms Suspense,” picking up the action and characters five years later.

The second novel is from the point of view of Blake’s sister, Brittany, who is deaf and is now helping raise her 3-year-old niece while also assisting her sister, Blake, in operating a bed and breakfast from the titular and ghostly home.

“It is a completely different story, but it has a lot of the same people,” Edwards said. “There is also a huge family component to the stories.”

“I’m excited for readers to pick up where they left off with the first book,” she added. “They can expect another romantic suspense with even more Southern charm and ghosts, along with several unexpected twists.”

It also was important for the Maryville native to focus on a character who was deaf, yet not portrayed as disabled.

“I grew up with more than one deaf family member, and I wanted to showcase the talent and independent spirit of a deaf person in my story,” she said. “It is not a plot point, just part of who she is.”

Already, the sequel has reached the Top 10 in Amazon’s New Releases in Southern Fiction and Ghost Fiction, and also received a five-star review from Reader’s Favorite.

While she also has a third book in the series planned, Edwards is taking a pause to write a completely different book.

She currently is on a book-signing tour, which started late last month in Charleston, and will continue from 6 to 8 p.m., Monday, June 14, at The Farragut Table, 10943 Kingston Pike.

Books will be available for purchase or readers may bring their previously purchased books for the signing, and guests also may register for door prizes.

“I have been very blessed,’ Edwards said of her foray into writing novels. “I have a wonderful support system, a great husband and a very spoiled little dog.”