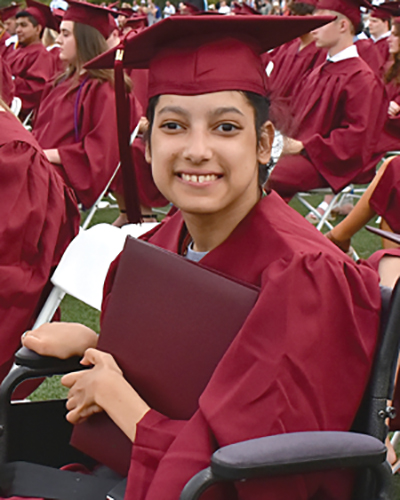 Following a difficult year filled with uncertainty and unprecedented regulations, Bearden High School Class of 2021 produced a record number of graduates who also received the highest amount of scholarship funds in school history.

A total of 502 seniors graduated Tuesday, June 1, during an evening ceremony held on BHS’s Bill Young Field for the second year in a row, as the stands were packed with family members, friends and well-wishers.

The class also earned more than $31.3 million in scholarships and produced its very first military school appointment, Cade Ringer, heading to the U.S. Air Force Academy in Colorado Springs, Colorado this fall. He was among 1,200 incoming freshmen selected for the honor from across the nation, Retired Air Force Col. Rick Kuhlman announced.

“Never settle for mediocrity,” Class valedictorian Nathanael Laing said in closing his speech. “Class of 2021, you are unstoppable.”

In her address, BHS principal Debbie Sayers acknowledged the senior class’s chosen graduation theme, a quote from the late actor, Chadwick Bozeman: “The struggles along the way are only meant to shape you for your purpose.

“... You are graduating with a hard-earned confidence that you can overcome challenge and hardship,” she added.

Katherine “Katie” Taylor, president of the Senior Committee, reported the Class was able to finish a Senior Class Gift Project begun by the Class of 2020, an awning outside the entrance used by BHS special education students.

“We unanimously voted to pick up where last year’s project left off,” she said, noting they were able to collect more than $7,000, which, when combined with last year’s fund, allowed purchase of the awning. “We are thrilled that this awing will protect our special education students from weather as they enter the building for many years to come.”