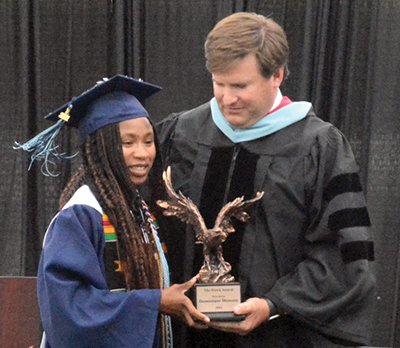 The “Star Trek” influence on Hardin Valley Academy valedictorian Owen Anthony Cianciolo, which he made into his graduation speech theme, and the friendly warning by Dr. Rob Speas, principal, for airhornes to “blow them now” early in the school’s 2021 commencement Wednesday evening, June 2, on the HVA football field were lighter moments during the evening.

In addition to the announcement that this class of 487 earned $32,061,235 in scholarships, one of the most rewarding moments came when graduate Dominique Romain, who will attend Yale University, earned the prestigious Hawk Award.

“She is one of the top students in our senior class while also keeping a positive attitude full of drive and perseverance,” Speas announced during the ceremony. “She exhibits unwavering kindness towards others at all times. ... She has represented our school at the local, state and national level for track and field. Dominique as been All-state seven times.”

On a somber note during his address to the Class of 2021, Speas referenced the four empty chairs to the front and left of where the graduates sat, which served as a memorial to assistant principal Ken Dunlap and three HVA students who died during the school year.

“While we miss them for the beautiful individuals that they are, we remember then and honor with the four chairs to my right,” he added.