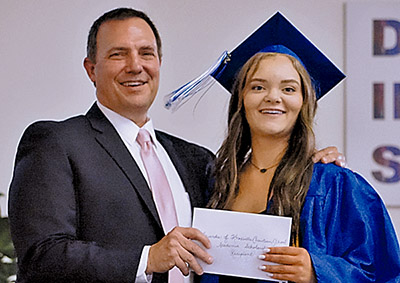 Anonymous donors at Knoxville Christian School have made a 2021 graduate very happy.

Gabriella “Gabby” Kooima was selected as the second recipient of a scholarship funded entirely by a group known as “The Friends of Knoxville Christian School.” Her name was randomly selected during graduation ceremonies held in early May.

“This is a special tradition we started just last year with generous donors who want to help our seniors financially as they further their education,” explained Chase Caples, KCS director of marketing and public relations.

Koomia said she will be attending Tennessee Technological University, where she plans to earn a bachelor’s degree in computer science and minor in cybersecurity.

It was at KCS, as a member of the school’s Cyber Patriot team, that she “fell in love with computer science,” she said.

“Additionally, watching Abi and Mcgee from (the TV show) NCIS helped steer me in the direction of computer science,” Kooima added. “I would eventually like to become a front-end developer or a cryptographer.”

“These funds are for students that have indicated to KCS administration that they intend to attend a four-year, two-year or even a technical/trade school,” he said.

Its members “all wish to remain anonymous, and actually do not really know of each other,” Simpson added. “They all do, however, believe in paying it forward and helping those students that do plan to continue their education.”

Thanks to COVID-19, “many things stopped in person at virtually every school,” Simpson said. “However, Knoxville Christian never skipped a beat and finished the school year online.

“At graduation, which was held on the regularly-scheduled date with almost all of it being online, we had received some gifts to go towards this scholarship — I believe it was $300,” he added.

“At our recent graduation on May 8, which took place at West End Church of Christ, there were even more donations toward this scholarship.This year’s scholarship was for $1,500, with some funds already (set aside) for the Class of 2022 graduates.”