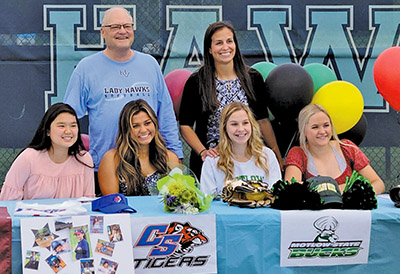 HARDIN VALLEY — After coaching in the Hardin Valley Academy softball program since its inception, head coach Whitney Cruze is stepping down.

She resigned after the 2021 softball season to spend more time with her family.

“It was a tough decision because I always wanted to coach high school softball,” said Cruze, who went 222-153 as HVA’s head coach from 2011 through 2021. “This was my dream job and I’ll always grateful to (former Hardin Valley principal Sallee) Reynolds and (former athletic director George) Ashe for giving me the opportunity to coach at Hardin Valley.

“It’s a great school and it’s still a new community,” she added. “It’s still growing. We had great community support. I’m hopeful that they’ll find somebody who can keep the program growing.”

Cruze, who joined the Lady Hawks as an assistant coach in 2009 shortly after she graduated from Carson-Newman University, has spent more than a decade as the school’s head coach — and she’s built a winner.

A perennial power in District 4-AAA, HVA earned a trip to the 2015 Class AAA State Tournament under Cruze.

She also won back-to-back Region 2-AAA championships in 2015 and 2016 and remains thankful for the chance to coach high school.

“Coaching is a calling, and I’ve been blessed to be at Hardin Valley,” Cruze said. “I feel like the Lord put me there and wanted me there.”

This year the Lady Hawks went 27-10 before being eliminated in the District 4-AAA Tournament semifinals.

Cruze admits she changed as a coach throughout her career.

“When I first started, it was all about winning,” she said. “But as I grew, as I got older and as I matured, it became about building relationships.”

She also noted that losing the majority of the 2020 campaign to the COVID-19 pandemic changed not only her, but also her Hardin Valley players.

“After we lost last season, our team decided to take an attitude of gratefulness,” Cruze said. “Our team decided that we were going to be grateful for the opportunities that we had to step on the field.”

While Cruze admits she’ll miss the diamond, she said it was time to step down.

With two young children, Cruze said she will support them in their soccer and T-ball endeavors.

“My kids started playing soccer and T-ball last year, and it hurt me not to be there for them,” she said. “It hurt my heart.

When I started this season, I didn’t know that it would be my last,” Cruze added. “But I knew my time was coming.”

As a player, Cruze was a big name on the high school softball scene in the Knoxville area. She was a star shortstop at Knoxville Central High School while also playing basketball for three seasons for the Lady Bobcats.

After a stellar softball career in Fountain City, she went on to play for Carson-Newman.