3D-printed, self-drive Olli made in H-Valley 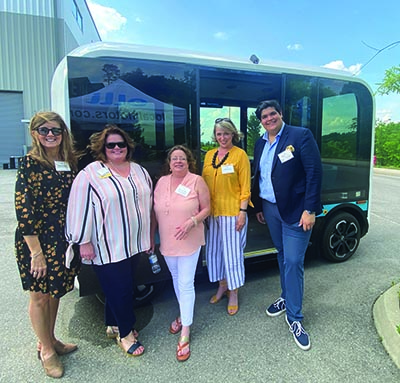 Local Motors, 2030 Valley Vista Lane near the Hardin Valley exit of Pellissippi Parkway, is bringing transportation into the future with Olli, a 3D-printed, autonomous, electric shuttle.

“The shuttle, the Olli, is capable of driving itself on a fixed route,” said Johnny Scotello, Technical Product and Marketing director with Local Motors.

“I think it’s incredibly important. As the population ages and we try to reduce our carbon footprint, this is the way the future is going.

“By law, there must be a safety steward in the Olli to make sure there is human intervention, but once it’s on the route, it drives itself and it has obstacle avoiders,” he added. “So if someone were to run out or a bicycle were to come through or there was something in the road, the Olli would either stop, slow down or change its course, given the laws of the road to remain on its route.”

However, the vehicle is not intended for the average motorist on public roads, highways and Interstates, he pointed out.

“Olli, which weighs 4,900 pounds, is intended to transport people around campuses amusement theme parks, colleges, hospitals, military bases and even large shopping centers, such as Turkey Creek,” Scotello said about this vehicle, which is 13.6 feet long, 6.6 feet wide and 8.7 feet tall.

Additionally, the Olli is Americans with Disabilities Act compliant to help with passengers who have mobility issues, and the steward is there to help anyone on and off the shuttle.

“It also is equipped with a wheelchair ramp and ramp restraints,” he added.

Olli is designed as a slow-speed vehicle — 12 mph in autonomous mode or 25 mph in manual mode.

When Local Motors was formed in 2007, Scotello said it was not making self-driving 3D-printed shuttles. Rather, it was a mobility company based on crowd-sourced design.

However, “our company realized, early on, that additive manufacturing, or 3D printing, was the next wave of the future of ... automotive design,” he said.

The first car featured at the trade show was made out of ABS plastic, but with subsequent material science research, Local Motors created its own proprietary blend of polycarbonate, “so it is a polyester-based plastic with carbon fiber re-enforcement, and that is all 3D printed,” Scotello said. “The upper and lower structure of the Olli are printed and milled for assembly in a little more than 12 hours.”

Scotello said the company started manufacturing the Olli in 2019, deploying it all over the world.

“We’re proud to have our microfactory in Hardin Valley,” he added. “This is a great area to recruit new team members and build a strong company.”