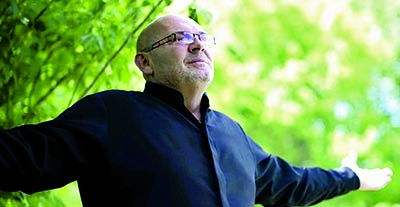 A Concord man — who along with his family experienced the only state-inducted off-world UFO case — has been the subject of nearly a dozen television shows during the past year, and will be a key speaker this weekend at the annual Roswell UFO Festival in Roswell, New Mexico.

Thom Reed, who has lived in Concord since 2006, is on a mission to share his first-hand account of incidents he experienced as a child, culminating in an occurrence he shared with his mother, his brother and his grandmother on Sept. 1, 1969, in Sheffield, Massachusetts.

“I talk about this because I’m on a campaign to straighten out or clear up earlier tabloid or cartoon-like coverage, which is unfair,” he said.

As a child, Reed said unusual encounters began in the Berkshires when he was 6 years old, and happened sporadically until the September 1969 incident.

His mother was driving, and his grandmother was in the passenger seat, while he and his brother were both in the backseat, he recalled.

They drove through the Sheffield covered bridge, and “when we left the bridge and came out the other side, we saw what looked like a self-contained sphere of white light,” Reed said. “As it rose up maybe two stories, there were rods of light coming from both sides.

“The overall image looked like an ice cream cone or an upside-down Hershey’s kiss,” he added.

Reed’s brother noticed a second sphere of light, which also looked to be over the water. Reed said everything then became “still and quiet” and the family saw a “turtle shell-shaped disc hovering over a field to their left.”

A total of three objects — two spheres of light and the shell-shaped object — created a triangle with the Reed’s car being located in its center, then the car “exploded with light,” Reed recalled.

Three hours passed, during which the family had little recollection, but when they became aware of their surroundings once again, Reed’s mother and grandmother had somehow switched places in the front seat.

The family was not alone in reporting unexplained phenomena that night. More than 250 area residents reported various encounters and sightings, also noted by a local radio station and by the Sheffield Police Department.

To this day, Reed is unsure of what exactly happened that night. He has passed repeated polygraph tests about the events of that night specifically.

“Do I think there was an off-world presence that caused us to be removed from the car?” he rhetorically asked. “One hundred percent. I can tell you I saw something extraordinary. …”

He also noted military involvement could be behind it, as well as possible ties to the magnesium element, noting, “The magnesium that was mined for the atomic bomb was mined 3 miles from our restaurant over in Connecticut.”

He said the area also was well-known for pollutants.

“Who knows what happened?”

On Feb. 6, 2015, the Great Barrington (Massachusetts) Historical Society and Museum inducted the case event into the state’s official archives.

“The Historical Society in Massachusetts has, formerly and officially, inducted the first off-world UFO case in U.S. history,” Society officials stated. “(Confirming) that the incident is historically significant and true and warrants induction.”

Later that same year, Reed received a Governor’s Citation recognizing the induction, which states, in part, “your dedicated service to the incident was factually upheld, founded and deemed historically significant and true by means of Massachusetts history. The records highlighting the historic event are now officially part of the great Barrington MA historical collection and your recent induction into Massachusetts history on Nov. 3, 2015.”

A concrete monument initially was installed outside the bridge to commemorate the sighting, which has since been replaced by a “beautiful sculpture donated by (the television show) Ancient Aliens,” said Reed, who noted the Thom Reed UFO Monument Park also was established on adjacent land, which has become a tourist attraction — and even recently hosted a wedding.

Reed, founder and former owner of Miami Models in South Beach, Florida, has been the subject of many national and international cable TV shows, including an appearance on the Netflix Unsolved Mysteries reboot that began streaming last summer.

While expectations were high, Reed said he “feels a little regret” about how that particular segment turned out.

“There was so much they left out,” he said, adding the piece “really sold it short by not showing the state and government documents, especially as it is a document-driven program.”

While a proposed follow-up to fill in the missing gaps was initially suggested, Reed moved on, having since worked with a handful of TV networks to continue to preserve the grounded narrative that also pays tribute to his late father.

Additionally, he plans to share many of those official documents not included in the Unsolved Mysteries broadcast this weekend in Roswell.

Reed has spoken for many years at the Roswell event.

“We made history,” he said. “I want to share what happened, and let the world know I feel very privileged to be part of that.”