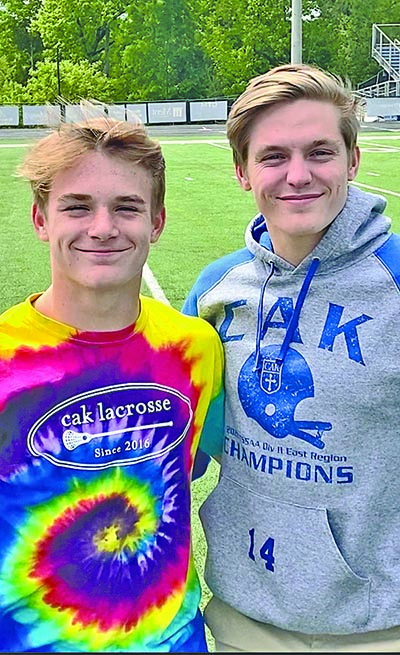 Sparked by a father-son relationship, Rotary Club of Farragut is preparing to sponsor a new Interact Club at Christian Academy of Knoxville.

CAK rising senior Luke Myers, son of RCF member Noah Myers, said he was so inspired by his experience attending Rotary Club meetings to form an Interact Club at his school for his Capstone senior project.

“I’m super excited about it,” Frost said. “I think it will benefit not only the school, but also the fellow peers and community as well.”

“Each senior does a Capstone senior project at CAK,” Luke said. “It’s a 40-hour service project that we do to serve the community.

“The last quarter of the last semester, the students talked about what they were going to do,” he added. “I’ve had the idea of starting the (Interact) Club a few years.

“My dad is in the Farragut Rotary Club and has been for about 20 years at this point. I would go there to Wednesday meetings in the summer with my dad.”

“Luke was about 6 weeks old the first time I brought him as my guest to Farragut Rotary,” Noah Myers said. “I introduced him as a future Rotarian … however he slept through the meeting in his baby carrier.

“That was nearly 18 years ago,” the dad added. “Since that time, he has joined us for many meetings, Flu Shot Saturdays, stream clean ups and social events.”

Recalling his son’s early inquiries, “When he was very young, he asked ‘What’s Rotary about?’” Noah said. “I replied, ‘It’s about folks in the community who can make a larger positive impact in this world as an organized group rather than as an individual.’  Luke has been hooked on Rotary ever since …”

When Noah discovered CAK did not already have an Interact Club, he encouraged Luke to “put in the research and work into starting one.

“I’m super excited and proud of him,” Noah added about his son. “I hope this endeavor will introduce many future CAK high school students to Rotary and the lifelong opportunities it creates to give back to our communities.”

“I’ve always enjoyed the Rotary Club meeting and thought I would implement the same ideals at CAK,” Luke said. “As of now, we are going to officially start the club in the fall of the coming school year.

“Davis and I have been talking about (starting the club) … for a year,” he added. “We like to think ahead.”

“Luke and I talked about it for a long time,” said Frost, son of Parker and Lisa Frost. “I felt like it was something that was missing, and it would create leadership skills and a place for students to get together and share ideas about bettering the school and community.”

“We introduced the idea to friends and fellow peers at CAK and told them to think about it,” Luke said.

They also talked to the Capstone teacher and contacted RCF to get official approval.

“It’s exciting, but it can be a bit scary with all the requirements,” Luke said.

The success of HVA Interact Club spurred RCF to entertain sponsoring another school.

“I’d like to commend the Hardin Valley Academy Interact Club for your diligence during the year,” 2020-21 RCF president Edward Jones said during a recent Rotary meeting in Fox Den Country Club.

“They have performed wonderfully through out the year,” he added. “When the Rotary Club of Farragut showed up (at service projects), so did the Hardin Valley Interact Club.”

“They have been very, very busy, I’m certainly very proud of you guys for what you’ve done.”