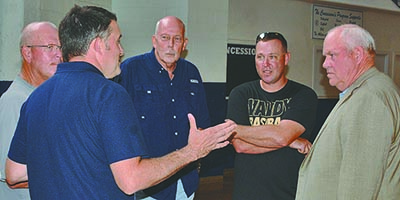 Phillip Fulmer’s introduction to organized youth football in his hometown of Winchester, which came in the early 1960s, is a personal time frame he would like to see duplicated among today’s football youth roughly 60 years later.

“I started playing in the seventh grade,” said Fulmer, an All-SEC guard for the Tennessee Volunteers (1969-71) who as UT head coach led the Vols to the 1998 national championship.

“I think it was my peers” who were an influence in his decision to play.

“We had played in the backyard for all those years,” added Fulmer, whose UT teams were regularly ranked in the top 15 to 25 nationally — four in the top five — throughout most of his 16 full seasons at the head-coaching helm. “They gave us a chance to come out for the elementary school (team); it wasn’t (called) a middle school at the time.

“I just really enjoyed it and loved it — the camaraderie of the team in the locker room. And it grew from there.”

Though the choice to start playing organized football in the second through sixth grades wasn’t possible then because “I don’t think we had the Pee Wee teams that they have in this day and age,” Fulmer emphasized that wasn’t a bad thing.

“I would argue seventh grade is about the right time to start,” he added. “It’s a difficult sport, and with contact and those kind of things you might burn a kid out long before he gets to a place where he really understands the game.”

Concerning otherwise well-meaning parents-turned-youth coaches, “Sometimes in football you can get somebody who’s a little over-aggressive for a young person to handle,” Fulmer said. “I would be concerned about that,” fearing an over-emphasis “on winning or being too physical” before some young boys are ready to handle such pressures.

With the growing publicity about permanent brain damage from multiple concussions suffered by famed football players taking repeated, severe blows to the head for several years, Fulmer said, “I think everybody is paying great attention to that,” emphasizing the youth, high school and college levels. “I think the equipment has gotten so much better.

“I think coaches understand practice routines much better” to help prevent head injuries, he added, which includes “drills to do and drills not to do.

“And the rules are changing for the better.”

However, “More and more moms are a little bit on the concerned side, particularly when they start earlier,” Fulmer said. “When they get big enough to defend themselves, and know how to do techniques and form-tackle or block, those kinds of things, then they’ve got a lesser chance for those bad things to happen.”