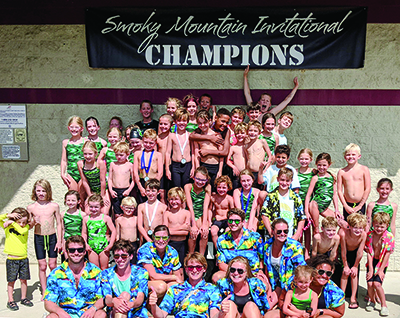 ALCOA — In Sarah Fortney’s 11 years as a Village Green swim team coach, her Gators have failed to win the annual Smoky Mountain Invitational Swim Meet in Blount County just once.

Old habits die hard, and Fortney’s roughly 130 swimmers once again were champions — among a 24-team field reaching from Newport and Morristown south throughout Knox County and the Maryville area — celebrating their two-day feat at Springbrook Pool in Alcoa Sunday afternoon, July 11.

“This meet is typically a highlight for our team each summer. ... Traditionally, Village Green has a history of doing really well,” said Fortney, in her eighth season as Gators head coach, about SMI, which features each team’s “summer-only” swimmers in a youth sport filled with year-round swimmers on high school teams and with area club squads.

“We traditionally have a large number of summer-only swimmers,” she added.

“I would say that Lydia and Bo were certainly our biggest highlights of the meet,” Fortney said.

As pinpointing reasons for the team’s success this season, “We’ve have an absolutely phenomenal (assistant) coaching staff,” Fortney said.