Cook Out moves to Turkey Creek 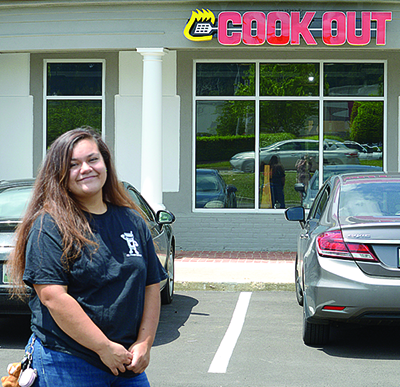 “I feel what will make the difference (with Cook Out) is we have so many options for a cheap price,” said Cheyenne Turner, a trainer who is part of the travel team of the franchise. “We have a big variety of foods.

“That’s why Cook Out is really growing big,” she added.

“They know where to put their locations, like college towns, where there are teenagers with just a few dollars,” Turner said.

Cook Out serves up the traditional “cook out” fare: burgers, quesadillas and hot dogs, along with BLTs, wraps, chicken nuggets and chicken strips.

Customers can choose a “tray,” starting at $5.99, that includes one of the main (meat) items with two side items, which can include fries, onion rings, hush puppies or one of the other choices.

“I believe the store is also going to have okra,” Turner added. “I think that’s going to be big because a lot of people have asked for it.

“I think one (other) store has okra, and that’s in Greenville.”

Customers also can “choose two and double up (a side order),” she added. “We have eight or nine options you can choose for the sides.”

Additionally, Cook Out has 40-plus flavors of milkshakes, one of which one is a watermelon shake.

“You can literally mix any flavor you want,” Turner said. “It’s the same price.

“We also have the floats and cheesecake slices.”

Turner said she thinks the owners chose Turkey Creek because it has good visibility along Parkside Drive with shops and other businesses surrounding it.

“You have four entrances that come in here,” she added. “They thought it would be a nice place where people could stop in quick and get a little tray cheap.

Customers can utilize both drive-through service and the lobby service.

While opening last week, Turner said the restaurant still is looking for employees. Those interested can come to one of the area Cook Out stores.