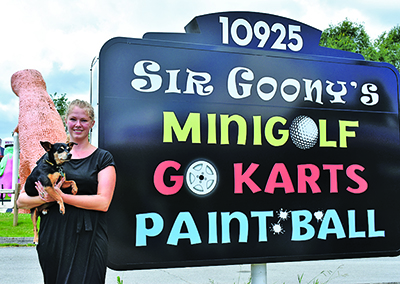 Growing up amid Sir Goony’s Family Fun Center’s whimsical golf course made for more than just a magical childhood for Shelby Rae Stringfield — it spoke to her very soul.

Now a competition-winning writer and soon-to-be doctoral student, she credits her upbringing and storytelling influences from her father, Johnnie Stringfield, with laying a foundation and sparking her creativity.

“I always knew I wanted to be a writer,” Stringfield said earlier this summer, helping out and working where it all began 24 years ago, when her father bought the property that was originally constructed in 1987.

She was 4 years old when she came to know and love the oversized characters that make up the 18-hole putt-putt course, ranging from a veritable zoo with a friendly dinosaur, a gorilla, a giraffe and an elephant, as well as nursery rhyme characters and beloved icons, including Humpty Dumpty, Cinderella’s carriage — and even a fairy tale-inspired castle among them.

“It was a fun and imaginative place to grow up,” Stringfield said. “I always wanted to be involved here, and still do when I’m home.”

Her parents homeschooled Stringfield, and along the way her father’s retelling of his own experiences growing up in rural Sunbright on the northern tip of Morgan County made quite an impression.

“He’s had an interesting life, and he always told me stories about his childhood,” she said. “They didn’t have plumbing or electricity. Hearing those stories, I thought he grew up in the same time period as Tom Sawyer.”

By age 15, Stringfield was attending Pellissippi State Community College as a dually-enrolled student. It was her first real taste of a classroom setting, and she admits initially it was a struggle.

“I think I got all C+’s my first semester,” she said. “I think that’s an important part of my story because it shows that you don’t have to be good at something from the beginning to get to where you want to end up. I got a C+ in my first college English course, and now I’m starting a PhD in the English department and have taught college English classes.

“I like to talk about that because I think young students can get discouraged, feeling that a ‘bad grade’ is the end of the world when it’s not,” she added.

She then applied and was accepted to the University of Tennessee, Knoxville, where she received her undergraduate degree in English with a concentration in creative writing in 2014.

“I am very much a people person, which is why I picked UT: so I could be around people everyday,” she said. “I really enjoyed it there. I had amazing teachers, especially in the English department.”

Her next stop was Iowa State University, where she spent three years “and very cold winters” before graduating in 2019 with a Master of Fine Arts degree in Creative Writing & Environment.

Along the way, she wrote numerous short stories with a focus on fiction, publishing under her middle name. “I loved the idea of a pen name when I found out about the concept as a kid,” she said. “And I always loved my middle name.”

Stringfield has edited several magazines and publications and currently serves as assistant editor for Newfound Journal.

Earlier this year, she discovered she had won the prestigious NYC Midnight competition, a short story contest, which began with 4,700 writers and lasted four rounds until Stringfield’s work was judged the champion entry.

According to the NYC Midnight website, the competition has been around since 2002 and “participants are challenged to create original stories, screenplays or films using assigned elements under time constraints.”

In each round, writers are expected to write a completely different story based on specific criteria. “The first round lasted eight days,” she said. “By the last round, we were only given 24 hours to complete our stories, and it was down to only 40 writers,” Stringfield said, noting she had taken part in the competition previously in grad school “but only made it to the second round.”

When she was notified of her award, she said, “I had to read (the announcement) four times just to make sure. It was really exciting, and really I was just thrilled to get through the rounds.”

She received $6,000 for winning with her story, “Bird,” “which is the most anyone will ever be paid for a short story,” she said with a laugh.

“This was my first story acceptance, and I was shocked, but it is definitely my favorite short story I have ever written — although I am in love with the novel I wrote in grad school,” she added.

“Bird” was published online, and she offers it on her website, raestringfield.com, along with her other publications and additional information about her editorial services.

Stringfield said she also discovered an enthusiasm for rhetoric as a student teacher, and hopes to teach undergraduates after completing her Ph.D.

She also is looking forward to her westward relocation, accompanied by her constant companion, her dog, Gavin.

“I’m really excited about the move,” she said. “I love the Southwest. It’s beautiful there.”

Stringfield said she also is excited about the warmer climate.

“While I’m grateful for everything I learned and the writers I met in Iowa, I sure won’t miss the winters there.”