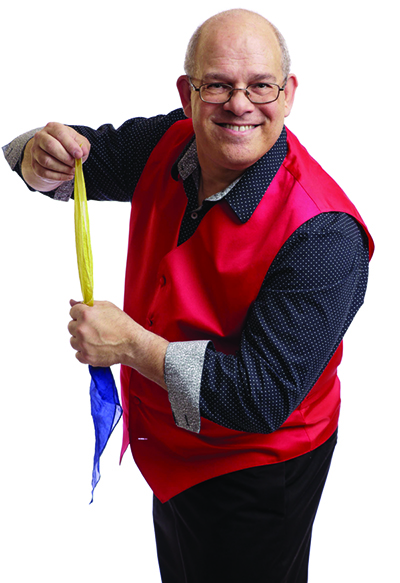 Michael Messing has been bringing magic wherever he goes — literally — for decades.

He said he receives much more than he gives.

“I get to make people smile,” Messing said. “That’s what it’s all about — it’s about making people have a good time, enjoying what they’re doing, taking their minds off everyday troubles — if they’re an adult. If they’re kids, just make them laugh, and occasionally say ‘wow.’

“I consider myself to be very lucky,” he added. “There aren’t too many people whose jobs are to make people smile for a living. It’s rewarding for me to see kids line up to check out (magic) books” in the Farragut library.

“I always wanted to be an entertainer,” the New Jersey native said. “When I was 8 years old, I attended a birthday party. There was a clown that did magic there … (his friend’s parents) saw how fascinated I was by it and so they bought me three magic books for my birthday.”

While he conceded he couldn’t comprehend the books then, he would later rediscover that fascination. When Messing was 10, his family moved from North Bergen, New Jersey, to Lafollette in Campbell County.

Then, “when I was 12, I was trying to figure out what to do one day, and I pulled the (magic) book off the shelf, and I’ve been doing it ever since.”

He initially learned from books and later incorporated videos, magic organizations and clubs, instruction from other magicians and conventions.

Messing did his first paid performance at 15, but backed off while attending college. After college, he worked as a reporter/photographer for a few years in Lenoir City.

But in 1986, he accepted a job at a Kentucky theme park, where he performed three shows a day, seven days a week. “I went full time after that,” he recalled.

Along with birthdays and other shows, he has performed for Knox County Public Libraries, starting about 20 years ago, and at Town of Farragut’s Book Fests starting seven years ago. “Magic has been my primary income since then until the pandemic,” Messing said. After events shut down, he worked at an insurance company, but he added the events are “coming back.”

Having been a magician for more than 30 years, he said, “... I get to go back to the same places on a regular basis ... I love to go to the library and say ‘hi’ to people I’ve seen for years and years, and I’ve really enjoyed doing Book Fest,” Messing said.