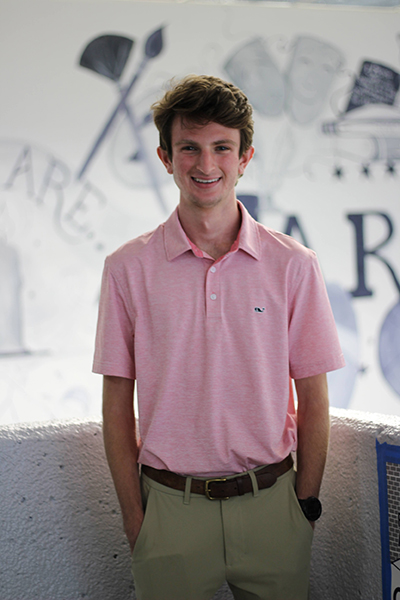 A family interest in politics and community service led the Town’s newest Education Relations Committee member into the public realm.

Farragut High School rising junior Ocean Edwards was selected earlier this summer as one of two FHS youth representatives on that committee — non-voting — and will join current member, rising senior Hannah Brennen, Wednesday, Aug. 4, at the ERC’s next scheduled meeting.

Edwards’ father, Jonathan Edwards, works for District Attorney Russell Johnson of the 9th Judicial District as an assistant D.A. for Roane, Morgan, Loudon and Meigs counties, while his mother, Wendy Edwards, formerly worked as a nurse.

Both have keenly impacted their son’s life and outlook as he has watched them serve their communities, said the teen, who has had the opportunity to work in the service realm and in politics. “Through my parents, I have seen the importance of having open dialogue, too,” he said.

Edwards helped campaign “door-to-door” for State Sen. Becky Duncan Massey (R-District 6), while he also served as a page to Middle Tennessee State. Sen. Paul Bailey when the family lived in Sparta before moving to Farragut in 2014.

“Government is one of my passions,” Edwards said, noting his involvement in FHS Student Government Association, of which he currently serves as vice president.

“Johnson has really helped me — he’s been great,” added Edwards, who also pointed out that law “is such a huge aspect of everything.”

While he has considered law as a profession, Edwards said he’s been “looking more into teaching and coaching.”

Also an athlete who runs cross-country and track for the Admirals, “I’m pretty passionate about running,” Edwards said. “I went to state this year to compete, and have been running track and cross country for seven years.”

He also is a member of FHS National Honor Society and helped raise funds for Second Harvest. The rising junior also has volunteered with Knoxville Youth Athletics camps in the past year.

Serving on the ERC was Edwards’ “first choice” among the Town committees. “I’ve seen the differences between education in a rural community versus the kind of education available in larger areas,” he said. “It is just so important to me to realize those differences as I do my best to represent FHS.”

Farragut principal Dr. John Bartlett recommended Edwards for the appointment, describing him as “a caring, kind-hearted young leader that leads with integrity of his convictions. He treats his fellow classmates and the staff of FHS with the utmost respect, always esteeming others better than himself. … Ocean makes everyone around him better.”