Byrd gets parade farewell at home 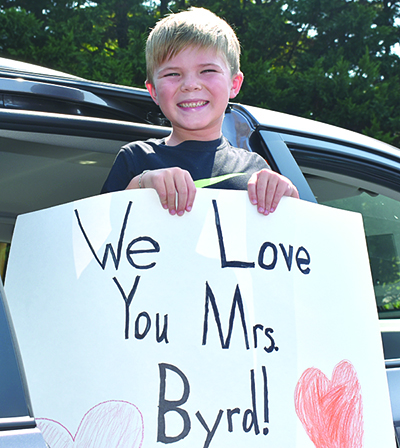 Changes always come with the start of a new Knox County Schools year, with the first day — a half-day — Monday, Aug. 9. Such changes are found at the top level of Farragut Primary School. (See related story on page 2A)

Byrd, who had served the school for 12 years — the last nine as principal — was reassigned to lead West Knoxville’s A.L. Lotts Elementary School earlier this summer, and parents decided to honor her one last time.

“She is and has been such a big part of our community. We wanted to send her off with lots of love,” said one of the organizing parents who asked to remain anonymous.

“She is such a special lady, and we just wanted her to know how much we will love and miss her,” another parent commented. “(A.L. Lotts) is really lucky to get her.”

More than 40 families had signed up online to take part in the parade, which Byrd’s husband, Russell Byrd, helped coordinate. They decorated their vehicles with colorful signs, balloons, streamers — and one even had a stuffed Dolphin, the school’s mascot, attached. The parade took off from the Fox Den Country Club parking lot around 4 p.m.

After Russell gave the go-ahead, the cars began streaming by Byrd’s home, where she was able to speak to each family driving by.

Along with balloons, car signs and posters, the avid golfer also was presented with an FDCC gift card thanks to donations from more than 100 families.

“I love you all, more than you know,” Byrd said through tears, as she greeted and hugged all the well-wishers. “Sometimes the Lord calls you somewhere else, but I will never forget you.”