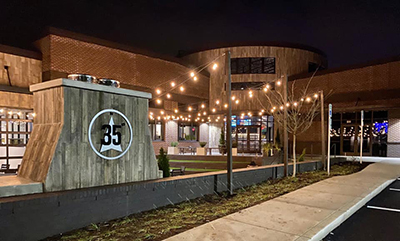 35 North sustained nearly $7,000 in damage early Monday, Aug. 2, when an allegedly intoxicated driver ran into the building located at the corner of Kingston Pike and North Campbell Station Road.

According to a Knox County Sherriff’s Office report, officers were notified of the accident at 4:46 a.m. after a 2020 black Chevy Silverado, driven by Luan Vo, no address listed, struck the front of the business.

“Officers immediately notated the strong smell of an alcoholic beverage emanating from Mr. Vo,” the report stated. “While speaking with Mr. Vo, officers also noted that he was unsteady on his feet and had bloodshot eyes.

“Mr. Vo stated that he had been driving the Silverado and ‘had been turning left’ and ‘didn’t remember anything else.’”

The report further stated, “Mr. Vo stated he had been leaving one house and going to a second house. Officers attempted to continue to question Mr. Vo, but had trouble due to a language barrier, which caused difficulty in understanding between Mr. Vo and officers.

“Mr. Vo did (say) he had consumed approximately four to six beers within an hour prior to the accident,” the report continued.

Vo, who refused to sign the Implied Consent form and refused to consent to a blood alcohol test, was placed under arrest and charged with Driving Under the Influence.

Listed damages included $5,000 to 35 North’s exterior wall, $500 each in damages to patio furniture, glass windows and a glass door, and $250 in damages to exterior wiring.M