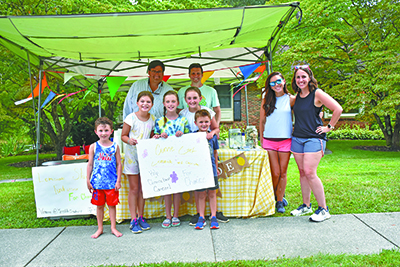 Two Farragut families spent the final Saturday of summer break putting others ahead of themselves, and raised more than $2,000 for a family in need.

Michael and Meredith Crawford, along with their children, Maddie Grace and Cooper, joined Cody and Brittany Payne, their children, Norah and Thatcher, and family friend, Annabelle Helton, in hosting a fundraising lemonade stand Saturday, Aug. 7, in Village Green subdivision.

“I have a friend, Trish Adams, that I know through the Knoxville Kappa Delta Sorority Alumnae Chapter, who’s son, Chance, has just been diagnosed with an aggressive medulloblastoma brain cancer,” Meredith said. “Hosting a lemonade stand was on Brittany’s family’s summer bucket list, so when they were looking for a cause, we realized Chance was the perfect one.”

They decided to host the effort at the Payne’s more central home location in Village Green, as the Crawfords live in Brixworth, said Meredith, who noted “people from the other side of Knoxville, and friends from all over either visited the stand or donated through Venmo.

“It was steady all day.”

Brittany said the families worked “for about two weeks,” getting everything ready, with Lenoir City bakery Sweets By Maya donating four dozen cupcakes and a gift certificate for two dozen cupcakes to raffle for the cause.

“The hardest part was finding a date that would work for everyone and praying the weather would hold out,” Meredith said.

“We wanted to do it before school started,” Brittany added.

While the parents watched over their efforts, the children manned the lemonade stand, and held hand-made signs to flag down passing motorists.

“I hope we can raise a lot for his family,” Annabelle said.

“We just really want him to get better and hope this will help,” Norah added.

“I’m hoping they will have enough money to pay for medical bills and food,” Maddie Grace said.

Chance, 5, and his family are South Knoxville residents. He and his mother and father (Ben Hicks) are at St. Jude’s Children’s Research Hospital in Memphis, where he began treatment this past Tuesday after already undergoing two brain surgeries at East Tennessee Children’s Hospital.

“They expect to be there on and off over the next year, and St. Jude’s is the only place that would treat him,” Meredith said. “He is in a trial there, that doctors have said is his only hope.”

By early Sunday, Aug. 8,the effort had raised $2,157, and Meredith said she will still be taking donations through Venmo @Meredith-Crawford-8.

“Please support this very worthy cause, and then please pray for this sweet boy and his family,” she added.