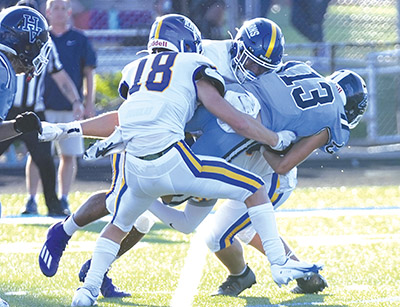 The Hawks were bitten by the turnover bug, and that would prove costly as they came up on the short end of a 21-7 decision against Karns Friday night, Aug. 20, at HVA.

The Hawks had four turnovers in their first game against Karns since 2014.

“The big thing was the turnovers,” Hardin Valley third-year head coach Mike Potter said. “I told the kids that you can’t come out and turn the ball over four or five times against a good club.”

But HVA would benefit from a Beavers’ mistake out of the gate.

The Hawks then engineered an 11-play, 35-yard drive that culminated in the game’s first score.

Overall, though, “We moved the ball pretty well but we just couldn’t finish our drives,” Potter said. “We missed several opportunities to get points on the board.”

Meanwhile, the Hawks had just 202 yards of total offense.

However, “I thought our guys played hard. They played hard from start to finish,” the Hawks coach added.

Karns’ DeShawn Bishop, a Tennessee Vols recruiting target, would rush for 274 yards on 31 carries, in addition to catching a pass from quarterback Cassen Huffaker and scampering 49 yards to the end zone to tie the game with 4:54 left in the opening frame.

The Beavers would take the lead for good early in the second stanza on Bishop’s second touchdown, a 58-yard scamper that gave Karns the 14-7 lead that it enjoyed at the half.

The visitors closed the scoring on a 1-yard plunge by Darius Huckleby in the fourth quarter.

“Our defense has improved so much, and I’m just so proud of those guys,” Karns head coach Brad Taylor said.

“This was a big win for our kids. This one’s special.”