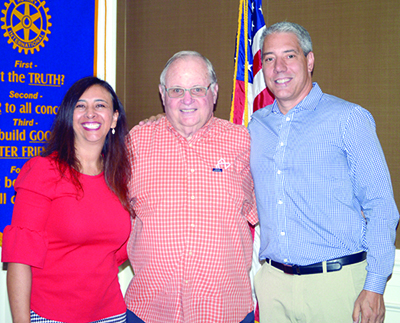 Kinson shared his story of how that exchange experience changed his life with Rotary Club of Farragut members during its regular meeting in Fox Den Country Club Wednesday, Aug. 18.

“Tony is a citizen of the world to the nth degree,” RCF member Bill Nichols, who has headed RCF’s RYE program for years.

Now married with three children, Kinson, who has lived near Farragut since 2008, works in Maryville for an international Belgian-owned company, Etex, for which he has been regional director for North America for the past five years. The $3 billion construction materials company manufactures extremely light, thin, high-temperature insulation used in defense, renewable energy and refractory sectors.

He recommends youths have that international experience if possible.

”I know the difference it made for me,” Kinson said. “It’s a good way to learn.”

He added it all began with a Rotary Youth Exchange trip to Portoviejo, Ecuador, when he was 16. His father, a lifelong Rotarian, introduced the exchange program to his family by hosting exchange students in the 1980s and 1990s.

“We probably hosted around 10 over those years and are still very close to many of them,” Kinson said. “My two (biological) older brothers both spent a year abroad, as well — one in Japan and the other in the Philippines.”

Then, it was Kinson’s turn.

“I realized early on, ‘I’m not in Kansas anymore,’” he recalled of his entry into Ecuador.

While in Portoviejo, Kinson learned a new culture and a new language. He tasted Ecuadorian foods, such as seviche, and saw the Amazon Forest and Galapagos Islands.

Eleven months later, he returned home, “proud to be an American,” and embarked on a life in the international arena. After high school, Kinson attended and graduated from The Citadel then was recruited for a sales role with Black & Decker, first in Miami then in Central America and the Caribbean; Red Wing Shoe Co., where he had partners in every country; then Etex.

“My life philosophy centers around three Fs: faith, family and fishing,” Kinson said. “You’ll find me involved with one or more of those three Fs.”