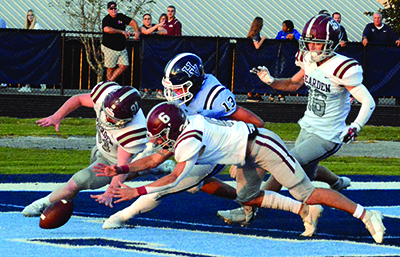 A half-dozen big plays told the story, as the Bulldogs improved to 2-1 while winning its Region 2-6A opener, 42-7, Friday evening, Sept. 3.

One key to Bearden’s special teams success was senior kicker/defensive back Ethan Ford, who blocked a punt that teammate Cody Clough recovered in the end zone for a touchdown; saved a touchdown when Hawk Ryan Nichol returned a kickoff 54 yards to the BHS 45; kicked six extra points and had two touchback kickoffs.

“The team came out with a lot of intensity,” Ford said. “… For the first regional game, we knew it was important.”

Taking a deflected Hardin Valley punt and starting at the HVA 21, Bearden got the scoring underway with Young’s 10-yard TD run. After a bad punt snap left Bearden at the Hawks 2, Young scored from 1 yard out.

“We really came together as a team. ... Our (first-string) defense shut them out, and special teams came away big tonight,” said Seth Arana, senior runningback/linebacker.

Preston LaBanca also had an interception for Bearden.

“We stunk it up, especially in special teams and offense,” HVA head coach Mike Potter said about his team (0-3, 0-1)

Its lone score was a 10-yard TD pass from quarterback Caleb Smith to Luca Moro.

Led by freshman quarterback Drew Parrott most of the game, “Our offense is slowly starting to figure out who they are,” Shinlever said. “We ran the football pretty well tonight.”

About finally getting to play at Bearden’s Bill Young Field for the first time this season — as South-Doyle (---) visits for a 7 p.m. opening kickoff Friday, Sept. 10 — “We’re excited to play at home,” Young said.