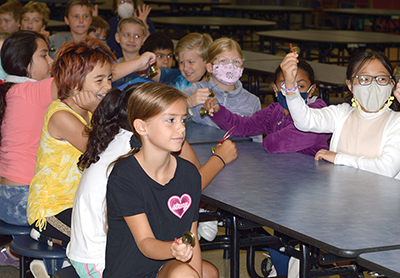 Farragut Intermediate School’s third- and fourth-graders learned more about the framing of the U.S. Constitution while observing Constitution Week with an assembly in FIS’s cafeteria Friday morning, Sept. 17.

Two hundred thirty-four years ago, “there were 39 brave men, on Sept. 17, 1787,” she said. “The Constitution is, like, the basic framework of our system of government. It separates the powers of our government into three branches (legislative, executive and judicial).”

She then asked students what they thought those branches were.

“It starts with an ‘s,’ one student called out while another called out “the White House.”

“We know the legislative branch makes the laws, the executive branch executes or makes sure those laws are put into place and the judicial branch interprets the laws,” Adorante summarized. “Another thing the Constitution does for us is it protects the rights of citizens.

“Usually, we think of adults as citizens, but you guys have an important role to play, too,” she said.

Before reading a Town proclamation, Farragut Vice Mayor Louise Povlin stated, “This is a very important document, the Constitution.

“As a local government, we have a Constitution from the State of Tennessee, as well, that we (Farragut Board of Mayor and Aldermen) have to follow to make sure we are preserving the citizens’ rights to do what they are allowed to do in our country,” she added.

In the proclamation, Povlin read, “Whereas September 17, 2021, marks the 234th Anniversary of the drafting of the Constitution of the United States of America by the Constitutional Convention;

“Whereas, it is fitting and proper to read, study and preach the greatest document of human liberty and to protect the freedoms set forth in the Bill of Rights ...

“Whereas, Public Law 915 guarantees the issuing of a proclamation each year by the president of the United States of America designating September 17 through the 23rd as Constitution Week.

“…Now, therefore, I, Vice Mayor Louse Povlin, do hereby proclaim that I will read and study the Constitution of the United States of America during Sept. 17-23, 2021, known as Constitution Week, and confirm I will abide by the above endorsements and reaffirm the ideals the framers of the Constitution had in 1787.”