State by a stroke 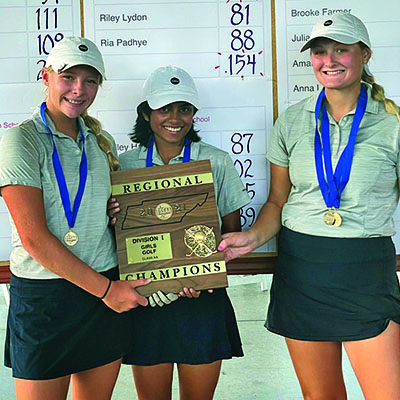 SEVIERVILLE — Led by medalist Gabby Starling’s 73 (3-over par), the Farragut Lady Admirals earned a trip to next week’s TSSAA Division I-AA Golf state tournament after slipping past Halls — by one stroke on the first playoff hole — in the Region 2 -AA tournament at Sevierville Golf Club Monday, Sept. 27.

The victory means the Lady Ads will return to this very course in one week, as the TSSAA Golf state championship will be held at SGC Monday and Tuesday, Oct. 4-5.

On that first playoff hole, “Riley Lydon birdied it, and Gabby bogeyed it, so we were even (par) for the hole; and Halls was 1-over (par),” Farragut head coach Jon Higgins said.

In addition to her clutch effort in the playoff, Lydon, a junior, shot 81 for the first 18 holes. Junior Ria Padhye also played for the Lady Ads (88).

Overall, “They played well,” Higgins said about his Farragut girls, adding Starling, a senior, and Lydon “were both very good on the front nine: Gabby was even, Riley was 3-over.”

Meanwhile, the FHS boys finished second, seven strokes behind No. 1 Halls. “They played well, they battled hard,” Higgins said. “There were tough conditions out there today. It was hot, windy. ... And it was a long course, around 6,500-to-6,600 yards.”

Brady Harville fired a 78, as did Sebastian Costales, earning both a top-10 finish. Carter Mayfield shot an 80, while Houston McKay had an 88.

“From where we were at the beginning of the season to where we finished, it is a testament to them,” Higgins said. “Then to lose in a playoff to Bearden and come in second in the region, I mean they’ve really battled hard over the last couple of weeks.”