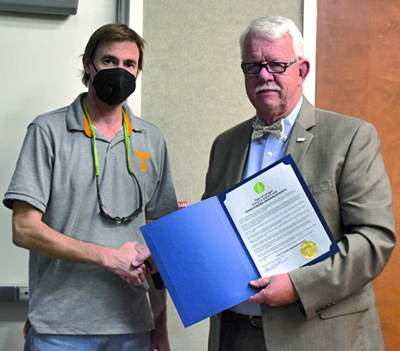 A Farragut business owner is highlighting a disease during October that unfortunately he and his family face every day of the year.

Urban Engineering, Inc. owner Chris Sharp and his wife, Kelly, have three children diagnosed with varying degrees of Postural Orthostatic Tachycardia Syndrome, which is a form of Dysautonomia, a group of medical conditions resulting in malfunction of the body’s autonomic nervous system.

“The autonomic nervous system controls things like breathing and heart rate — things you don’t have any control over,” Sharp said.

The couple’s daughter, Ella, now 18, and younger son, Christopher, now 15, were diagnosed with severe cases of POTS more than six years ago, while their older son, Reece Sharp, a University of Tennessee Knoxville student, has milder symptoms.

“It took Ella two years to be diagnosed,” Sharp said. “Different medications can help. She probably takes about 50 pills a day, including heart medications and receives two liters of saline daily intravenously.”

Christopher has a feeding tube, as he can’t process food properly.

“Both of them were perfectly normal and active six years ago, and now they are both basically homebound,” he added.

There is no cure for the disease.

A fundraiser from 4 to 7 p.m., Sunday, Oct. 24, will be held in Hard Knox Pizza in Hardin Valley. “There will be live music and food, and all donations from both fundraisers will go directly to Dysautonomia International (http://www.dysautonomiainternational.org/), a non-profit organization providing research for the disorder,” Sharp said.

Summer Dashe, a reporter with WATE-TV Channel 6 who also suffers from the disease, will emcee the fundraiser.

About POTS, “It is not environmental, and is believed to be somewhat genetic,” the concerned father said. “It typically seems to be associated with some type of trauma,” noting his daughter had sinus surgery he and doctors believe may have triggered the disease.

While Dysautonomia may appear rare, “and nobody seems to know about it, POTS alone affects one in 100 teens, and there are old cases they have identified that go back hundreds of years,” Sharp said. “We had never heard of it before our children were diagnosed.

“That is why we are making an effort to raise awareness,” he added. “For a disorder that affects so many people, very few people are aware that it exists. It is terrifying for the person suffering ... and their loved ones.”

Sharp and other POTS parents attended the Sept. 23 Town Board of Mayor and Aldermen meeting, as well as the September Knox County Commission meeting, where proclamations were read aloud and signed designating October as Dysautonomia Awareness Month in both Farragut and Knox County.

“This was the first year we lobbied for that, and my wife and I and the Knoxville POTS community are very thankful the Town and County were willing to do that,” Sharp said, crediting Commissioners Larsen Jay and Terry Hill.