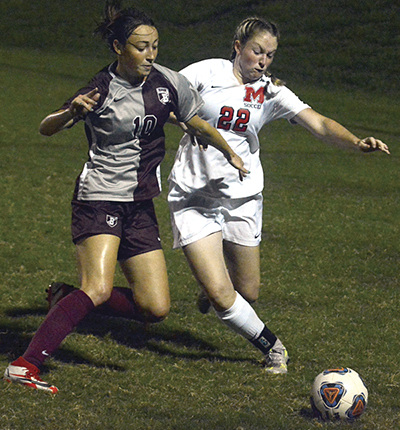 KNOXVILLE — Perhaps some area playoff teams are, in their heart of hearts, down to accepting a moral victory if they just score on the Bearden Lady SoccerDawgs.

“I thought our defense played well,” coach Radcliffe said. “I think our defense has played well all season with the amount of shutouts that we’ve had.

“... The message in this game was ‘take care of business’ so that we could have home-field advantage on Tuesday,” he added about the Oct. 19 Region 2-AAA must-win semifinal game, after deadline, as Bearden hosted District 3-AAA runner-up Knoxville West.

If Maryville won at Powell in the other Oct. 19 semifinal, the Lady Red Rebels would again travel to Turner-Allender Field for in the region title match beginning at 7 p.m. this evening, Thursday, Oct. 21.

Until the game’s final couple of minutes, Maryville’s only really good scoring chance came in the second minute.

Bearden led 2-0 at halftime thanks to goals in the 13th minute from junior Becca Roth and in the 40th minutes from sophomore Breana Mendoza.

The third goal was an “own goal” where a Maryville defender accidently headed the ball into her team’s own net in the 60 minute.

Despite earning three goals, Radcliffe said his team “struggled finishing” against Maryville, something also happening “in the first game against them.

“But it’s not a point in the season where we can be overly pessimistic about that,” he added. “Ultimately, we’re creating chances, we’ve just got to be a little bit more clinical.

“We had a few people step up and find the back of the net, so that was encouraging to see.”

The bottom line: “I think we’re getting better, and that’s what you want at this point,” Radcliffe said.

“... We’re going to get everybody’s best gameplan from here on out,” he added. “And it’s just up to us adjusting and keeping our confidence level where it is.”