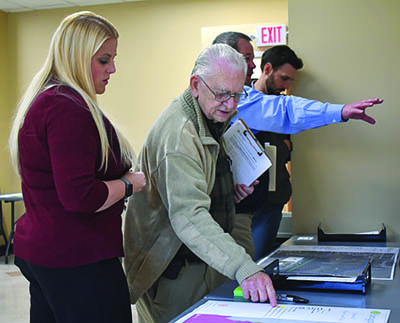 The first, held from 4 to 8 p.m., Monday, Nov. 15, sought input on the Boring Road corridor — the southern portion of Smith Road from Boring Road to Kingston Pike and to the west along each side of Kingston Pike to Virtue Road — as Town leaders are looking to update the Comprehensive Land Use Plan and the Future Land Use Map pertaining to that area.

Held in the Community Room at Town Hall, the workshop had 74 participants who signed in and were able to examine maps and literature available at walk-up stations and also engage with Community Development director Mark Shipley. Those who attended also were able to make and leave comments, which were to be compiled prior to any additionally meetings going forward.

“I was really impressed with all of the prep the Town had done for this workshop,” Kate Sultan of Village Green said. “The areas were clearly defined on large maps and the proposed land use gave us several options on which to voice our opinion.

“Once I completed my thoughts on that particular piece of the puzzle, I went to each of the other areas,” Sultan added. “Each of the areas had a different feel and the ideas for what may go into each area was a clear indication that a considerable amount of thought went into each concept.

“As a relatively new resident of Farragut, I continue to be impressed with the leadership of this Town. Having always lived in much larger cities, I rarely got involved with or thought much about decisions that were made. And the fact that much of the leadership are volunteers still astounds me.”

Sultan concluded her comments by thanking officials and Town staff “for a great workshop” and for their “time and energy.”

Wright said he appreciated the Town’s willingness to host the workshop.

Horne owns 41 acres within the Boring Road corridor and is looking to develop at least part of that land in the near future.

“It has had at least a six to eight unit-per-acre medium density residential classification since 2012 in the (Comprehensive) Land Use Plan, and he is hoping to submit a plan with Mike Stevens builders very soon for approval,” Horne said.

The workshop was the next step in the process as officials, staff and Comprehensive Land Use Plan advisory committee members have been working on updating the CLUP and Future Land Use map.

The Parks and Athletics Council — which collectively is working on helping craft the Town’s 10-year Parks and Recreation Master Plan — hosted the first of two public meetings Tuesday, Nov. 16, in the Assembly Hall of Farragut Community Center.

The organization is seeking input regarding Parks and Recreation projects and asked those attending to rank projects in order of personal preferences.

Online and short in-person surveys recently were conducted to determine community interest in future facilities, programs and initiatives. There were about 900 respondents, and this info was used to create the items to be voted on by the public.

Among 30 projects listed — including installing lighting at Anchor Park, installing swings at Mayor Bob Leonard Park, constructing additional tennis courts at McFee Park, constructing an amphitheater, installing fencing around playgrounds and splashpads, constructing a greenway connection from Enclave to Sheffield to Turkey Creek Road and acquiring land to build an aquatic center among them — visitors were asked to choose five as priorities.

The Town’s last parks master plan was created in 2012.

A draft of the master plan will be discussed at a Farragut Board of Mayor and Aldermen meeting in January and voted on in February.