Julia’s ‘ritual’ had a sizeable payoff 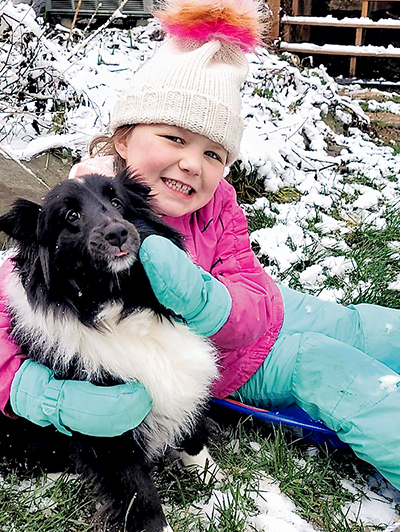 A Farragut Primary School second-grader is convinced her “snow ritual” paid off in a big way Monday, Jan. 3.

Before she went to bed the night before, Julia Logan Horne said she followed instructions relayed by her FPS physical education teacher Elizabeth Bell.

“I flushed ice cubes down the (commode), wore my pajamas inside out, and my teacher said to sleep with a toothbrush under our pillow — but I used two and seven different cups of ice,” Julia excitedly relayed that afternoon.

“She said if we did all that, the snow would probably come, and it did.”

The 7-year-old daughter of Katrina Logan Horne and the late Brook Horne said she wanted to try Bell’s ritual because “I love the snow, a lot, and we never get it anymore.”

Julia said she also was hoping for a little extra time added to the holiday winter break Knox County students enjoyed through Jan. 3.

Julia bundled up and played happily in the winter wonderland she firmly believes she helped bring about.

“I made snow cream and jumped on the trampoline and made a snow angel,” she said. “I got to go sledding in the backyard, and I’m gonna build a snowman later.”

“She has just been thrilled with the results,” said Katrina, who shared Julia’s methods on social media.

For her part, Bell said the “ritual” is one she has been sharing with her students since she started teaching 12 years ago.

“It is something I learned from my students, my first year of teaching,” Bell said. “Since then, over the years, I have jokingly shared the ‘tricks’ with students to get them excited for a possible snow day.

“Who doesn’t love a good snow day?” she added. “Kids at the primary age love to have something to believe in.”

Especially if it works. Perhaps Julia’s ritual also could be credited with the second round of snow that took place at the end of last week.