Town shows gratitude to its volunteers with annual banquet 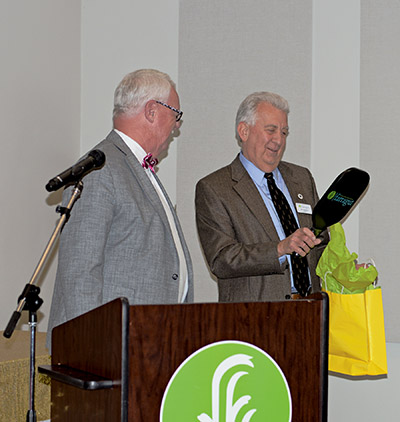 About 110 Town of Farragut volunteers, as well as Town staff, were treated to the annual Farragut’s Unsung Navy Volunteer & Committee Banquet, which took place in Farragut Community Center Friday, April 8.

As Mayor Ron Williams welcomed everyone, he described the event as “our version of the Oscars.”

“We are so glad to be approaching some type of normal again by gathering all together,” he said while thanking all the Town’s volunteers for sharing their time and talents.

“You are all ‘Oscar’ winners in our eyes,” Williams added.

Currently, he said the Town has more than 80 volunteers, including its youth members, serving on 10 standing committees and “who do an outstanding job of contributing to the success of the Town.”

Along with those committees, he said the Town has another avenue of volunteering: Farragut’s Unsung Navy, which began in January 1992. Those volunteers worked as museum docents and in the gift shop and assisting at special events, such as the Shamrock Ball.

“This represents a savings to the Town of well over $1.5 million,” he said. “Many of our endeavors, including help in the museum and gift shop and our numerous special events, would not be possible without those hours of dedication from our FUN volunteers.”

Among the Town’s volunteers, Williams honored Alderman Ron Pinchok, who is term-limited and will complete his second term as South Ward alderman in August.

“Ron has been a dedicated volunteer for the Town over the past 13 years,” Williams said of the alderman. “Ron started his services to the Town by serving on the Parks and Athletics Council in 2011.

“The next year, he joined the former Economic Development Advisory Council,” the mayor said. “During his tenure on those committees, Pinchok served as chairman of each.

“Ron was first elected as alderman for Ward 2 in 2014 and was elected vice mayor in August 2016,” Williams said. “Ron stepped in as mayor from June to August 2018, after the passing of Mayor Ralph McGill. In August (2018), he returned to serving as the South Ward alderman.”

Besides serving as alderman, Pinchok also serves as a Board of Mayor and Alderman representative on the Visual Resources Review Board, the Beer Board and Tourist and Visitor Advisory Committee.

“Ron is passionate about the importance of parks and recreation for our community and has consistently promoted the development of the parks, including the latest phase of McFee Park,” Williams said. “Ron worked closely with other elected officials from both the Town of Farragut and Knox County to approve the partnership that resulted in the Town’s Community Center and Knox County Senior Center.”

Additionally, the mayor said Pinchok has been working with potential sponsors for additional park facilities, which would include an upcoming bike, hike and run trail at McFee Park.

“We appreciate all the hard work and talent that Ron has provided as an elected official of the Town and we will miss his leadership, but we hope he will stay involved as a volunteer,” Williams said. “We know that he is a dedicated tennis player but is also heavily involved in pickleball.”

With that, Williams presented Pinchok with his gift, a pickleball paddle.

Along with the alderman, the following were recognized for their service: