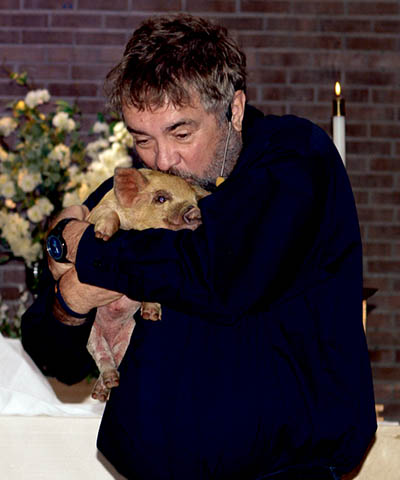 Faith Lutheran Church’s co-pastors, the Rev. Bob Stelter and the Rev. Dan Forehand, each kissed a 6-week-old piglet during services in the church, 225 Jamestowne Blvd., Sunday, April 24, to close out a Christmas-time fundraiser to feed people around the world.

“It’s a great blessing to do just a small part to help others,” Forehand said. “This was our Christmas gift to the world.”

While Stelter said Sunday’s services were fun, he pointed out, “It makes people realize there’re so many people in the world in need, and we did this right around Christmas time so we tied it into gift giving.

“A lot of people received pigs around the world at Christmas time because of the generosity of the church,” he added.

Last Sunday, the two piglets, borrowed from She Diggs Farm of Hardin Valley, visited the congregation before the 9 and 11:11 a.m. services, then were brought into the sanctuary before each service to be kissed by the pastors.

“It felt like kissing a pig,” Stelter said with a smile. “It was fun to do because we challenged the congregation, and they more than rose up to the occasion.”

“The congregation enjoyed it,” Forehand added. “It was a good, joyful day to celebrate.”

He explained FLC is one of several thousand congregations of Evangelical Lutheran Church in America, which also has an international arm that works with impoverished communities around the globe.

“One program it has is called ELCA Good Gifts, which allows individuals to make donations in the form of buying livestock, wells or other things that benefit individuals living in poverty,” Forehand said. “Back in December, we challenged the congregation to buy 30 pigs, and the price of a pig is $30 … $900 total.

“We said if we got 30 pigs then, at some point, (the pastors) would kiss a pig,” he added. “The congregation got 110 pigs, and somebody bought two goats because they wanted to buy goats instead of a pig.

“These 110 pigs would go throughout the world to help families to provide fertilizer. The pigs could have up to 16 piglets a year, which is a source of income for the families as well, and they’re a really important part of farming and subsistence for people around the world.”

“(Church members) really went above and beyond, so we’re glad to pay our debt and celebrate all the pigs that they bought,” Stelter said.

“We don’t know where the pigs go for sure,” Forehand said. “There’s something really beautiful about the anonymity of it.

“It’s a great gift to know a family will receive a pig,” he added. “They won’t know it’s from us, and yet, it will be just a great blessing for them.

“We’d never think of a pig as a blessing, (but) it could be transformational to the life of that family. At the same time, “it’s something that can be fun and engaging for the congregation and change somebody’s life. It’s a win-win and a great gift for us and for the world.”

The church waited until spring to have the pigs come to the church. “We didn’t want a big pig for this, so we had to wait for piglet season and they were old enough to be weaned from their moms so we could bring them in,” Forehand said.

“... But, it’s perfect,” he added. “It works great for the Easter season of celebrating new life and new possibilities for people around the world.”