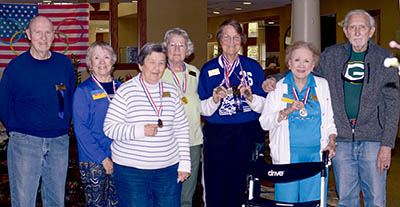 Sherrill Hills Retirement Resort residents took part in their own version of the Senior Olympics with lower-key games that culminated in an ice cream social at the community, 271 Moss Grove Blvd. in Knoxville, Thursday, April 21.

“This was so fun — the camaraderie, the competition, the smiles, the craziness,” said new resident Sadie Stroud, who won several medals. “It was a wonderful day.”

“We had a full day of events here for the residents,” said Bridgett Sharp, SHRR lifestyle director. “We’ve had an event for them every hour.

“We started off this morning at 9 a.m. with our volleyball tournament,” she added. “All of our contestants won medals. We had a really good time today and a lot of participation.