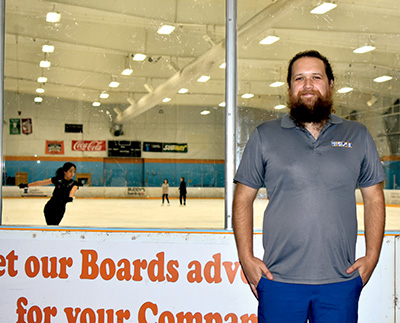 Farragut’s Cool Sports, Home of the Icearium, currently is on a five-week hiatus while owner Basil Skelton spends nearly $200,000 on much-needed upgrades.

The 20-year-old regional ice rink, which boasts the only NHL-sized rink in the area, closed down Sunday, June 19, to begin the ice-melting process as staff prepares for installation of a new chiller and overhauling of the compressor and condenser.

“We are doing this for two reasons — because we care, and because we are letting the community know they are stuck with us,” said Ronald Cohorst, Cool Sports assistant general manager, with the latter part said in jest. “We came out pretty strong on the other side of COVID-19 and are here to stay.

“Everything we are doing, will help us get ready for the next 20 years,” he added.

The ice rink’s sand sub-flooring — instead of concrete utilized at other sites, such as the Knoxville Civic Coliseum — makes the process more lengthy, Cohorst said.

“We have to bring the temperature up gradually,” he said. “If it was concrete, it would be a much quicker process.”

In addition to starting and completing the prep work, “we will have to remove the old chiller,” Cohorst said.

Workers also will be checking all pipes and parts while the new equipment is installed.

Repainting inside also will be part of the overhaul.

“We are sticking with the baby blue and orange-stripe theme,” confirmed Cohorst, who has been with Cool Sports for 17 years.

Upgrades also will take place on the separate indoor soccer and basketball courts, where its HVAC system will be overhauled.

Some aspects of the improvements will be up to the supply chain to provide. For example, its new compressor has been under construction in Canada since March.

“There are a lot of moving pieces to this project,” Cohorst added, noting the five-week time frame “had about a week of wiggle room.