‘Curtains play within a play’ at BHS soon 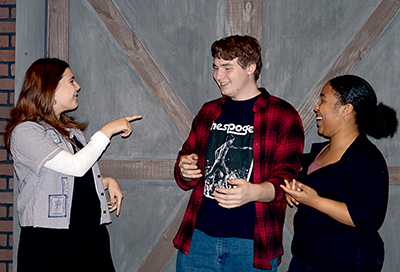 Bearden High School Theatre is presenting “Curtains,” a musical “play within a play” that includes a murder mystery, music and comedy beginning at 7:30 p.m., Thursday and Saturday, Nov. 10 and Nov. 12, and starting at 2:30 p.m., Sunday, Nov 13, in BHS Auditorium, 8352 Kingston Pike.

The show is open to the public.

“We need everyone who is free and loves a good time to come down to Bearden and to see our show,” said Lauren Andrejko, director and theater teacher.

“We invite the general public to come and share in this great talent,” she added “It’s an amazing experience, and it’s always a good time. I’m so proud of these kids.”

With a 50-student cast and crew, there are 32 cast members making up the show, according to Andrejko.

“The gist of ‘Curtains’ is that there’s a musical that’s going on in Boston; but on opening night, the lead actress gets murdered on the stage,” said BHS senior Luke Bouchard, who portrays Lt. Frank Cioffi in the production. “My character has to come in, solve the murder, as well as fix the show and make it ready for the Broadway stage.

Playing Lt. Cioffi “has been a big responsibility, but a lot of fun,” Bouchard added. “Not only being able to take on a bigger role and interact with people on a much larger scale, but also learning accents and stuff has been really interesting.”

One of his challenges has been to learn the Boston accent.

“I actually watched JFK’s moon speech several times to prepare for it,” Bouchard said about the former president.

“I love it,” Izzy Fenech, also a senior, said about playing the character, Georgia Hendricks, the lyricist of the show, who takes over the lead in the play. “That was the one part I thought would fit me best because I don’t think I’m old enough to play Carmen or youthful enough to play Nicki.

“I thought Georgia was a perfect in-between,” Fenech added.

BHS junior Sarenity Wright is taking on the role of Carmen Bernstein.

“I was very excited (to be chosen),” Wright said. “I love playing strong, passionate women.

“I felt that Carmen was similar to myself in many ways, just because she’s so driven and stubborn in a way,” the junior added. “So, getting to play this part and representing Bearden is an honor.”

Tickets are $12 for general admission and $15 for reserved seating. To purchase, go online at beardentheatre.com.

“When you go on the website there will be a graph (showing) where there is reserved seating and where standard seating is,” said Janie Brice, a junior who is part of the business crew and public relations.

However, those interested can pay online or at the door at the same price, she added.

The show was chosen last year. “We wanted a show that embraced a lot of different styles, had a great ensemble, and I think ‘Curtains’ really does that well because it’s just a show about people being in a show, and that’s what we are,” Bouchard said. “So, it’s very honest.”

“’Curtains’ is one of those shows that’s a very analytical show in the sense that it’s not well-known, but it’s made by some of the greatest writers of ‘Chicago,’ which is a very popular (Broadway musical),” Brice said. “It has a good combination of mystery, suspense and comedy.”

“This show is so fun,” Andrejko said.

While not as well-known, Andreiko said, “It’s very smart writing, very good songs — and these kids, I’m in awe of them and their talent and dedication.”