Another season of excellence for Marching Admirals 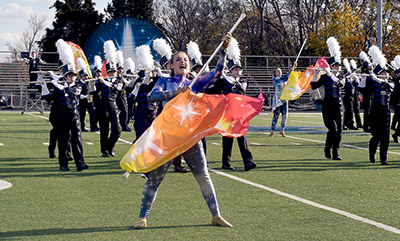 “The (Expo) went great,” FHS Band director Kenneth Carrico III said. “We were very happy with it and have received many compliments on the overall event.”

It was just three days after the Marching Ads had won a number of awards in Alcoa at the fourth and final competition of their season, where the group earned first-place awards in Music, Visual, General Effect and Color Guard categories; second place in Percussion; then first in its class (4A) and first overall in classes 3A and 4A.

“The season ended incredibly well and we had great success,” the band director added. “We could not be more proud of our students and their strive for excellence this marching band season.”

The Marching Ads did perform once more together: during the football playoff game between Farragut and Jefferson County at FHS’s Bill Clabo Field Friday night, Nov. 4.