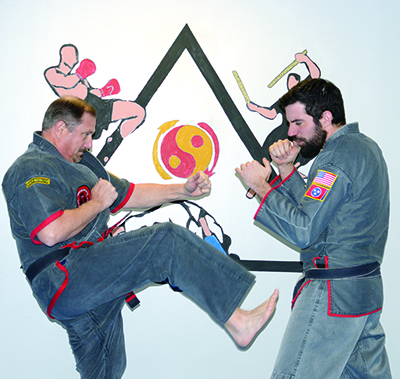 Now he has expanded to open another location closer to Farragut, at 215 Center Park Drive along Kingston Pike.

David recently took over the lease for the new location, where his father, Bruce Corrigan, had a martial arts club that provided private martial arts lessons to a small number of students.

“It has been very exciting for me because one of the things that separates us from other martial arts schools is we have a very strong lineage in the martial arts that we teach,” David said.

“I’ve run a school in Oak Ridge that offers large classes for all ages,” he added. “We’ve been in Oak Ridge since 2005.”

David said students often asked him when he was going to open another school.

“And the answer has always been ‘when we have more instructors who are ready to teach,’” he said. “We decided to expand and take over this location so we could open up programs for everyone — not just (Bruce’s) small club of students — last October.

“One of the problems in martial arts is that often schools expand and open more locations before they have instructors qualified to teach their martial art,” David added. “Often, then, the art gets watered down over time.”

Progressive Martial Arts Academy offers classes for all ages: 4 to 7 years old, known as Little Dragons; 8 to 12 years; teens; and adults. He said his oldest student is 77.

With more than 10 instructors, the core martial art PMAA teaches is kenpo, a style of karate.

“Our method of teaching kenpo is called filkenjutsu, which integrates the most effective techniques from all of the other martial arts that we teach,” David said.

The academy also teaches Brazilian jiu jitsu, which teaches students to grapple on the ground; jeet kune do, Bruce Lee’s style of martial arts; the Filipino martial arts, which primarily focuses on using weapons — sticks and knives — and kickboxing.

“We offer classes throughout the day for private lessons, but most of our group classes happen after school (for younger students) and in the evenings for adults — after work,” David said.

“The first step for anyone interested in getting started is a free private, introductory lesson to learn more about our school and our method of teaching,” he added. “They can call 865-481-8901 to schedule a lesson or visit pmaknoxville.com/.

“I come from a military family,” as both parents served in the U.S. Navy, David said.

“My dad retired from the Navy after 22 years — served during (Operation) Desert Storm,” his son added. “We moved around a lot, but we settled here in West Knoxville in 1998.”

Bruce started training in martial arts in high school and “stuck with it his entire life,” David said. His dad continued training in the Navy.

While David was not in the military, he “just did martial arts my entire life,” he said. “My siblings and I grew up on the mats, training in martial arts.”