With revenge in mind, Ads dominate Hawks at HVA 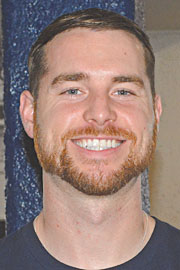 The Hawks proved to be rude guests, and went home with a 67-56 win.

Tuesday night at HVA, the Admirals had their chance at redemption. And they capitalized on it big-time.

Behind a balanced scoring attack led by do-everything senior forward/center Dallas Carbaugh, Farragut built an early lead, maintained it through three quarters, then pulled away in the fourth for a resounding 73-54 win.

“Farragut played phenomenal,” Arendt said. “JP (Burris) did a great job in preparing them. They were better prepared, they were a tougher, more physical team and it showed. They beat us in every facet of the game.”

Farragut led 22-14 after one frame behind the scoring of six players. The Hawks fought back and cut the deficit to three, 27-24, with 4:31 left in the half.

FHS answered with nine straight points, and the lead was 36-24 late in the half. The half ended with the Admirals leading 40-27.

But that’s the closest the Hawks would get. A 9-2 run by Farragut put the lead back to 13, and the Admirals cruised from there.

“We can go 11, 12 deep,” Burris said. “We feel comfortable playing that many those kinds of minutes.”

Carbaugh was a force on the boards as well as on offense.

“He’s everywhere,” Burris said. “He’s our senior leader. We had lots of guys that stepped up tonight. When we play together as a unit we can be pretty good.”

“We locked in on defense and it was the key to us winning this game,” Carbaugh said. “Our mindset was to come in and do what we do and get the win.”