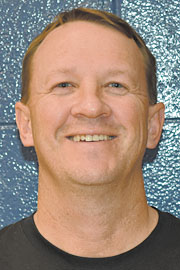 HARDIN VALLEY — On the road at Hardin Valley Academy Tuesday night, Farragut High School’s girls’ basketball team built an early lead, then held off several scrappy comeback attempts by the Lady Hawks and prevailed 57-43 in a District 4-4A rivalry contest.

Lady Admirals heade coach Jason Mayfield was pleased to get the district road win, but thought his squad’s second-half performance was a bit lacking.

“We don’t take for granted district wins on the road,” Mayfield said. “I don’t think we had our best second half, think our girls got a little complacent. We just kinda milked it away instead of finishing it off.”

An 8-0 run to start the second frame gave FHS a 28-13 lead, and it looked like a blowout was looming. The Lady Hawks hung around, however, and the half ended 33-21 Farragut.

Farragut answered with five straight to end the third up 45-32. Three times in the fourth the Lady Hawks cut the deficit to 10, but couldn’t get closer.

“She’s fantastic,” Mayfield said about McNealy. “She can shoot the ball well, she works really hard; glad to have her in our program.”

“I think we came out really strong in the first quarter,” McNealy said. “We knew they could come back, and we’d have to stay out on ‘em and play good defense. We tried to focus on getting out on people defensively.

“They’re a good team, they don’t quit,” she added.

“I thought we played hard, I thought we got some looks,” Galloway said. “Farragut is a good team. We scrapped, we hung around; this team’s not ever gonna give up. Thats the mark of this team. We’re gonna fight to the end.”